The global bioelectric medicine market accounted for USD 19.29 billion in 2021 and is projected to reach US$ 36 billion by 2030, growing at a CAGR of 7.18% from 2021 to 2030. Bioelectronics medical market is expected to grow during the forecast period pertaining to the rise in the number of chronic diseases which are mostly prevalent in the genetic population. 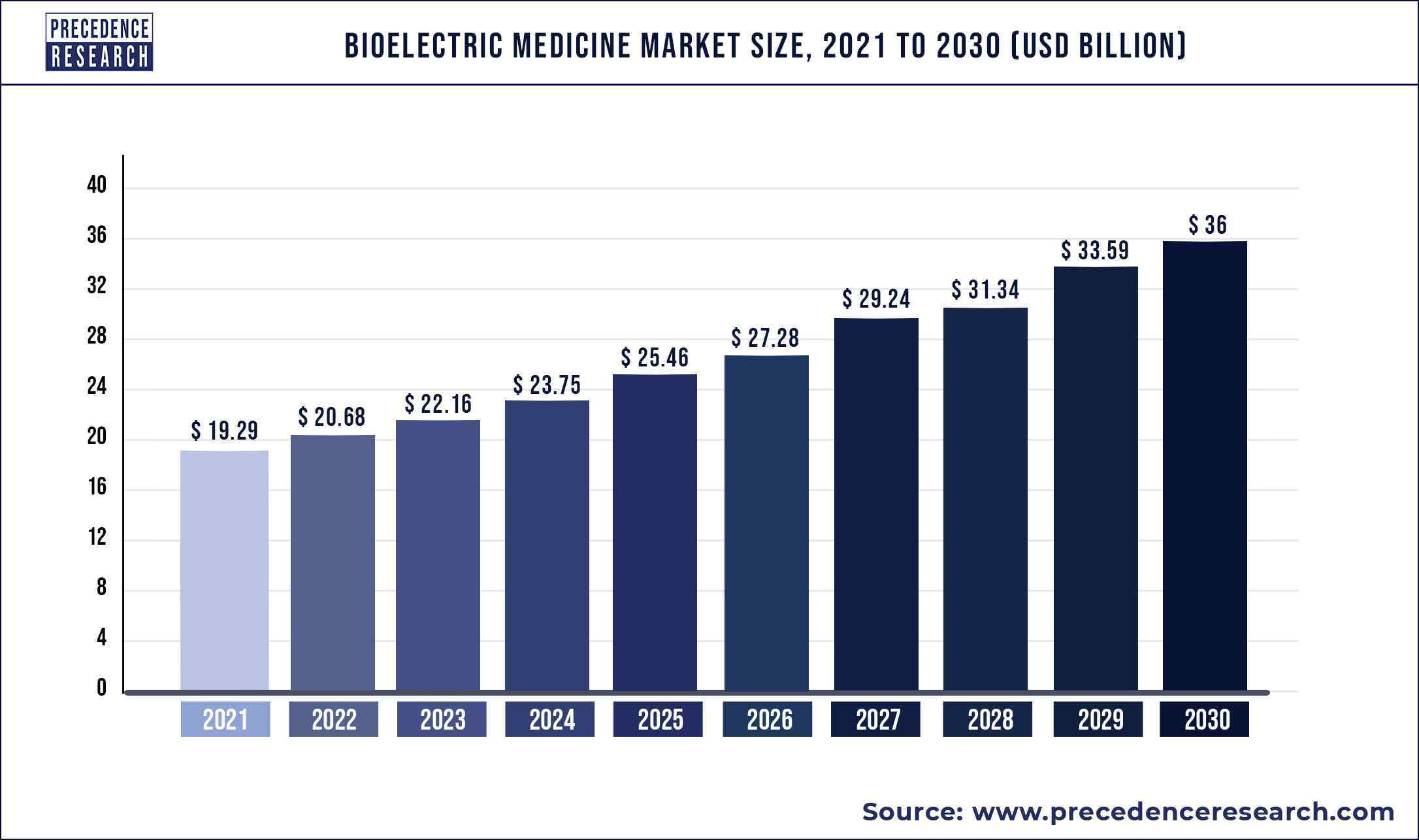 Bioelectronics medical market is expected to grow during the forecast period pertaining to the rise in the number of chronic diseases which are mostly prevalent in the genetic population. Increase in the number of new and advanced electroceuticals has also boosted the market to a great extent. The huge amount of investment done by the government regarding the healthcare facilities have also propelled the market for bioelectronic medicine.

On the basis of the product, the implantable cardioverter defibrillator segment will garner largest revenue in the forecast period. It is used in the treatment of arrhythmia. Increasing geriatric population and chronic cardiovascular diseases which lead to increase in the cardiac arrests is driving the growth of the market. lifestyle induced disorders like depression and obesity along with the increasing cases of Parkinson's disease or creating a demand for deep brain stimulators. The deep brain stimulators segment is expected to grow well during the forecast period and period most of the patients suffering with the Parkinson's disease are based in Europe.

On the basis of the type of bioelectric medicine does implantable electrical device will have a good market growth during the forecast period and it will dominate the market. Implantable electrical devices are extremely useful in the treatment of sensor neural hearing loss, chronic pain and many other such diseases. For only detection and diagnosis of various diseases manufacturers are concentrating on building advanced products. The noninvasive electrical device will also have good amount of growth during the forecast period. Electricals are gaining popularity in developing nations. Innovations in this product are expected to drive the market both in the Asia Pacific region.

North America has shown the highest growth as a result of the high number of geriatric age group residing in the country. The developed economical structure of the country has given a boost to the market. Asia Pacific countries like China and India too have provided for a lucrative market during the forecast period. Other nations contributing to he growth of the market are Africa, Korea and the European nations.

Neuroscience and bio engineering being the major principles of the bio electronic medicines, numerous diseases have found their way out in the market. The development of nerves stimulating technology is include the use of molecular medicine in the human bodies. This technology makes use of invasive unknown invisible methods for the stimulation and modulation of the nervous system by the use of electrical impulses. This advanced technology is considered to be replacement for numerous diseases which are treated by medicines. Thus, reducing the number of side effects suffered by the patient. These therapies usually include the method of spinal cord stimulation and implants such as for the cochlea and retina.

The outbreak of the covid-19 pandemic slowed down the market for the electroceuticals pertaining to the increased number for selective surgeries carried out by the hospitals to avoid the risk of cross infection to the patient. The higher cost of the retinal and cochlear implants has also posed a challenge in front of the market for its potential sale. The strict government policies and guidelines regarding production and distribution of such advanced technology along with the taxation barriers have hampered the growth of the market during the forecast period. Shortage of the expert professional for handling of such advanced technologies has also affected the market growth to a great extent.

The huge number of people belonging to the geriatric age group has increased the number of chronic ailments prevailing in the market. The post covid scenario presents a lower immunity among many people which makes them easily susceptible to various diseases. The option of invasive and non invasive procedures provided by the electroceuticals market has also shifted the attraction of people from regular medicinal treatment carried out in small to medium clinics and healthcare centers. The introduction of the molecular medicines into the system has also boosted the overall treatment plan of the diseases. Modulation of nerve impulses is performed by electric signals.

The policies and terms implemented by the government over the manufacturing process and marketing of the advanced medical technologies have challenged the growth of the market. Lower socioeconomic background of the people suffering with chronic diseases has also hampered the capacity of the patients to opt for modern electroceuticals pertaining to the high cost of the services provided.

Segments covered in the report

Thanks for reading you can also get individual chapter-wise sections or region-wise report versions such as North America, Europe, or the Asia Pacific.